Five Times Africa has Taken the Lead on Environmental Consciousness

Many of you who follow our posts regularly will know about The Filing Room’s commitment to a greener future. In our New Year’s Day article (which you can access here) we discussed one of our initiatives to offset the company’s carbon footprint.

Over the last two years, The Filing Room has been planting eucalyptus and grevillea trees in Western Kenya. Reforestation is, as we all know, the best method currently available for sucking carbon dioxide out of the atmosphere. Our reforestation drive is a big part of our commitment to a more sustainable future.

We are not alone in thinking for our future. Many Africans appreciate the natural world as we do. This article seeks to pay respect to the people of Africa, its governments and influential thinkers, who are striving to reduce humanity’s impact on our beautiful earth.

Kenya’s high-profile plastic bag ban was international news when it broke in 2017. The country joined Rwanda in its commitment to reducing plastic waste. Since then, Tanzania has also implemented a ban.

Plastic was once hailed as a miracle material and miraculous it still is. However, its longevity is as much a problem as it is a solution to many of modernity’s head-scratchers. Everyday use of this long-lasting material is unsustainable. Things needed to change.

East Africa thrives on tourism and the big pulling factor of this beautiful part of the world is its natural simplicity, its wild, untouched areas. Plastic pollution was a scourge on many of these once-pristine places. Bags were also being found inside the stomachs of livestock and wild animals.

East Africa’s governments stepped up where others have lagged behind. Since the ban in Kenya, the government says 80% of the populace have stopped using single-use plastic. For any of us that care about a greener future, this is good news.

Visitors to Rwanda are often said to pause and ask why the country is so clean. The answer surprises many foreigners though it will not be news to those that have witnessed Rwanda’s sense of community. Once a month, on the very last Saturday, the entire country rises in a nation-wide act of communal cleaning.

Each of Rwanda’s citizens puts their life on pause to partake in a mass community event that all benefit from. ‘Umaganda’, a Kinyarwanda word, means ‘coming together in common purpose to achieve an outcome’.

The general cleanliness of the country attests to its achievement of this goal. 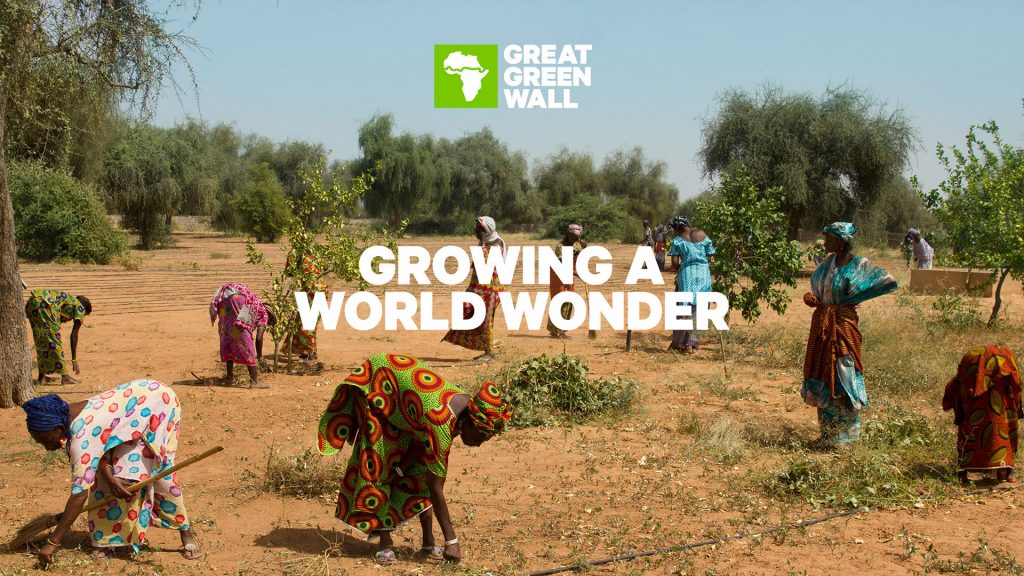 Despite many of the best efforts displayed in this article, environmental change continues. Every day the threat to our natural world grows. As such, we have been forced to resort to desperate measures. We now face the challenge of counteracting climate change as well as reducing its impact.

One particular challenge facing sub-Saharan Africa, is the growth of the desert that gives the region its name. As the planet’s temperature rises, the Sahara threatens to move south, destroying livelihoods and fragile eco-systems.

The African Union which is spearheading the initiative hopes to halt the desertification of central Africa. The Great Green Wall project is a huge undertaking. By planting trees along the entire southern border of the Sahara, those involved hope that they can arrest the desert’s growth.

The aim is ambitious: to build an 8,000-kilometre-long, man-made forest. When it is completed, it is hoped that the region will suffer less at the hands of drought and famine.

This article has mentioned many initiatives enacted by governments and other official bodies. But it is not just our national leaders that are making amends for humanity’s excesses.

Nelplast Eco Ghana Limited is a Ghanaian company that recycles plastic waste, turning it into construction materials for roadways. Annually, they collect around 570 tonnes of plastic and turn it into paving slabs and tiles. All the while boosting community engagement in cleaning and recycling and providing local jobs.

Nelplast Eco are a truly revolutionary company that have taken stock of our changing world and decided to do something about it.

The idea for the Africa Eco Race was conceived in the wake of the decision to move the Dakar Rally outside of Africa following the 2008 edition’s security fears.

It is built on the same adventurous spirit as the previous rally race but, as the name suggests, the Africa Eco Race puts a greater impetus on environmentalism and sustainability.

The race continues to grow in popularity and so too does its capacity for sustainable change. One category of racers comprises of vehicles entirely fuelled by renewable energy sources. As such the events stands itself apart from its popular predecessor in Africa, even as it builds awareness for environmentalism.

Furthermore, a certain portion of the race’s proceeds go toward green initiatives. In 2011, for example, the race organisers planted 3,000 eucalyptus trees in Mauritania.